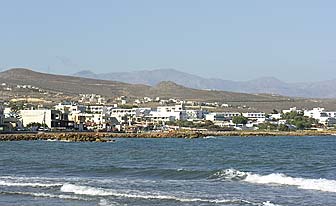 Kokkini Hani was originally a small fishing village which became a popular weekend spot for the residents of nearby Heraklion, thanks to the area’s good sand and shingle beaches and clean waters. Kokkini Hani is a good base to explore the region, being quite close to most places in central Crete. Kokkini Hani is pretty laid-back especially compared to Hersonisos and Malia. And when you want more action you can hop in a car (or a taxi) and drive to Hersonissos which is only 10 km away.

Getting there: located 15 km east of Heraklion. Buses run between Kokkini Hani and Heraklion at least every half hour throughout the day.

Accommodation: there aren't too many large hotels (and those are in the hands of the package tour companies) but plenty of holiday apartments and studios. Find accommodation in Kokkini Hani

Restaurants: there are around 30 restaurants and 15 bars

Shopping and services: a few supermarkets and plenty of other shops to cover your needs. Several car rental agencies.

Beach: large sandy beach at Vathianos Kampos with a big hotel (Arina Sand). The beach further east consists of short stretches of sand interrupted by rocks. The area is known for its north-west wind, which make the place often very good for wind-surfing.

In the area: a Minoan villa is located nearby at Niros. There is also a waterpark (called Watercity) near the village of Anopolis, a few km inland

Links to other resorts: